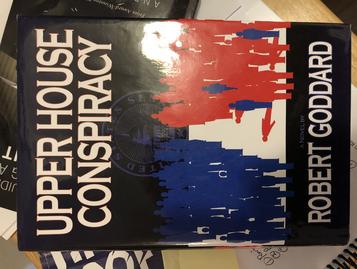 The setting is Granville House, in the historic section of Charleston, South Carolina.

It is a story of lust, greed, and murder.

Ethan Hall arrives in Charleston where he is to begin a new job as an art instructor in the local university.

He meets Katie Buchannan, a striking police detective, who draws him into helping her solve a case.

Bit by bit, Ethan begins to realize he is being used, but by whom? And it may be too late!

Matt Greer, a former special-forces guy, and Haley Stone, an investigative reporter, team up to stop a multi-billionaire who hates America from becoming the puppeteer of the candidate expected to become the next president of the U.S.

While pursuing a scandal story for his tabloid, Will O'Brien, a discredited former investigative reporter, discovers an aging senator's recent death by heart attack was an assassination.  He makes that claim in his weekly article, which produces a mysterious informer who tells him of an incredible conspiracy to assassinate senators in order to control the outcome of midterm elections.

O'Brien and DC detective Zalva Martinez pursue the conspiracy through a trail of murdered participants and witnesses, discovering a cabal of political fanatics with ties to one of our oldest European allies. Desperate to save the only remaining witness, they fall into a trap set by the conspirators.

A trap from which escape seems hopeless.

I pulled this book out of publication and sales for two reasons.

(1) I made the mistake of naming the political parties involved.

(2) Although sales were okay on Kindle, especially in Europe, the book was receiving negative reviews from some people who thought they were buying a book from their favorite author, Robert Goddard, an English writer who has written many books. I was totally unaware he existed. Both Amazon and Barnes & Noble listed my book along with the other Goddard's books.  Although I also had some good reviews posted, I was unable to cure this problem and pulled my book off both listings.

Some day, I may do a rewrite and maybe get a republication. Meanwhile, the other author has begun using the name Robert John Goddard.